It's going to be a busy high school football season for me, starting in about one month, when I start preparing the game programs for the season openers, which will be Aug. 22.

I will be handling the game programs for 24 different Salt Lake-area schools, and the first week looks like it will be the busiest. So, it will be important to have any glitches worked out immediately.

I'm still selling advertising for the programs, but the future looks bright. Here is a list of games where you will be able to find the "Matchup" game program.

Friday, Aug. 29 (9)
Murray at Hillcrest, Kearns at Cyprus, East at Skyline, Bingham at Alta, Juan Diego at Grantsville, Roy at Granger, Springville at Lehi, Taylorsville at Riverton, West at Tooele.

The Hype Gets Started 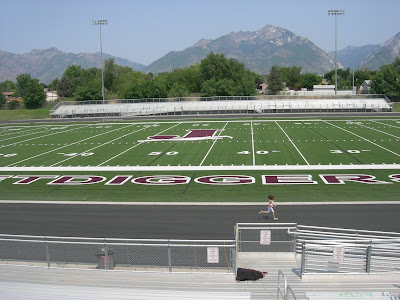 High school football in Utah is still over one month away, but already the excitement is starting to build. I'm sure the players, and perhaps the fans, are thrilled that fall is approaching, but most of the excitement starts with the media.
I listened to "The Prep Fan's" radio broadcast Saturday on 1320-KFAN. It wasn't an excited broadcast, but it was fun to listen to and I'll try to catch it each week. Who knows? Perhaps they'll invite me as a guest as soon as I'm more well known (following the season openers).
The Salt Lake Tribune's three prep writers - Maggie Thach, Chhun Sun and Tony Jones - have already started by attending "unofficial" practices and writing previews about teams. On Monday, for example, the Tribune highlighted Jordan High School.
I figure Jordan should be pretty good ... again. Last year, the Beetdiggers started well and then died. They lost their last three games. I attended two of them. But Jordan's coach, Alex Jacobsen, is a good motivator and his offensive coordinator knows what he's doing. Thus, the Diggers will always be able to score points.
Their problem last year was defense, and the fact they got tired. I noticed several of their players were playing both ways - offense and defense. It was really no surprise when they were beaten in the first round of the playoffs.
Jordan was also hurt by the fact that its field was unavailable. That's actually an interesting case, and I might pursue that a bit more later. Jordan spent the money to have a new - artificial turf/grass - field placed in its stadium. To my knowledge, no other school had this problem.
Look around. These new fields are up at Judge Memorial, Cottonwood, Juan Diego and now Alta and Bingham are putting them in. Hmmm. All these schools are east-side schools, too. When I went to visit Cyprus High last spring, it was apparent that it could use a field like that, too. But because more money is available on the east side, it's not likely to happen.
Regardless, I decided to visit Jordan the other day. I stopped by and looked at the Diggers' field. I also snapped a few photos (see above). It looks nice. It appears to be done, but the goalposts are not on the field yet, and there was a little bit of construction being done on the south end. The field is also surrounded by a track, and the lanes were not marked. That's not necessary for football, but I noticed it.
I have never attended a game at Jordan. There appeared to be nice restrooms on the south side, but I didn't see any kind of concession stand. Maybe it's just me, but I expected more. Well, I can't judge yet. Let's start the season. After I attend a game there, I'll provide a more-informed opinion.
I appreciate the Tribune's preseason coverage, and hope the Deseret News starts its coverage soon. You can read each on the links I've provided on the Home page of this site.

Local schedules are out

I just looked through the Deseret News web site and obtained copies of the 2008 football schedules for the Salt Lake City-area schools. They look pretty interesting.