Brighton Does It Again 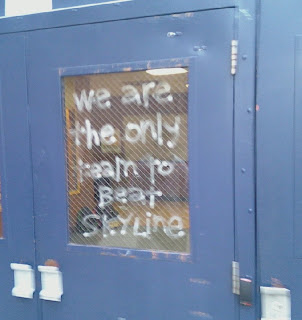 It has been a month since I last updated my blog. I've been busy, putting out programs, dealing with difficult printers, trying to keep my website up to date, publishing game programs and trying to see where this business is going.

It is going. That's for sure. This is a great time of the year, and I need to spend more time at games because that's the exciting place to be.

Tonight, I was at Brighton High School, watching the Bengals take on Skyline in a boys basketball game. I've wanted to see Skyline play for a long time, and this was a great opportunity. I also figured Rick Osterloh would be there. Skyline's top player is Ryan Osterloh and Rick is his dad. I have talked to him on the phone several times, and he has helped me in a few situations.

I delivered game programs to Brighton during the mid-afternoon and, while stopping by, I saw that someone had decorated this window in one of the entry doors to the gym. Ironically, Brighton's maintenance crew had cleaned the window by game time.

Brighton won 59-53. I expected Skyline to win this game because Brighton is playing without its leading scorer - Corbin Miller - who is likely out for the season due to an injury. Turns out the Bengals are playing better than ever.

Skyline started quickly, jumping to a 16-4 first-quarter lead. The Eagles had plenty of fans and they got into it with the Brighton cheering section, and it added to the atmosphere. Both teams were class acts. There was one time where the Skyline cheering section over-applauded the Brighton drill team.

I also noticed that, while Brighton's head coach is Lyndon Johnson, he has plenty of help. Sometimes, it was difficult to tell who was the head coach and who were the assistants. I guess coach Johnson understands he had good help around him. I doubt if Brighton gets outcoached too often by its opponents.

So, here were some other highlights (from my perspective):

* - I didn't see a state championship team. I was more impressed with Brighton because the Bengals got more output from several different players than Skyline.

* - Brighton forward Sam Wanderli has an uncanny ability to get rebounds. He had 11 tonight. Wunderli is 6-4, but he can leap and he is often in the right place at the right time.

* - Skyline's Kevin Wagstaff is fun to watch. He was the QB on the football team. On the basketball court, he never sits still. I'll bet the guy covered 20 miles, and he never showed signs of being tired. He led the team with 23 points, too. I'd hate to see where Skyline would be without him.

* - The player of the game was Austin Hudson. Brighton's 6-6 forward is only a sophomore, but he had 13 points and six rebounds, and he hit some big shots. Brighton needed a guy to step up and Hudson did that.

* - Fouls played a big role in the game. Brighton's Will Cannon played maybe 10 minutes and picked up five fouls. I almost felt sorry for the guy. Some nights are like that. Cannon could have sulked, but he came back in the fourth quarter and scored five points, including a three-pointer.

* - Ryan Osterloh only had six points. He is apparently not a "take charge" guy on the court. He lets the game come to him, and it didn't reach him much this time. He had foul trouble, too. He hit just one three-pointer, but it's apparent he has a sweet shot. I'd love to watch him when he gets hot.

* - What was the difference in this game? Brighton couldn't shoot, but the Bengals could rebound. The outrebounded Skyline 33-23, and also made it to the free-throw line a lot more.

I kept detailed statistics at the game. Here is my box score: