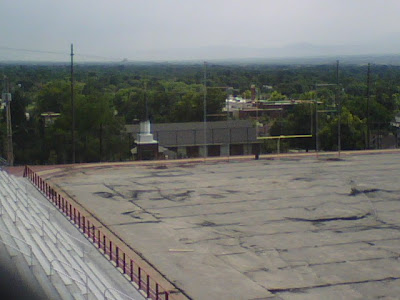 Last year it was Jordan. This year it seems Judge Memorial is going to be the Salt Lake City area school with field problems that means it will not be able to play on its home field.

The Salt Lake Tribune published a story today (Aug. 1) with the news. I knew something was up. I drove past Judge a couple of weeks ago and noticed its artificial-turf field was not on the ground (see photo).

Here is the article the Tribune published. Good job, Trib.

The Judge Memorial High football team will be forced to play its home games at Juan Diego, according to a source close to the Bulldogs program, because renovations to its field are progressing slowly.

The source, who spoke with The Tribune by cell phone Thursday, confirmed that Judge had hoped repairs on McCarthy Stadium would be finished in time for the season opener. But, repairs have been slow in coming, forcing the Bulldogs to look elsewhere for a home.

"Nobody wants to take responsibility for repairing the stadium," said the source. "It's a shame because it's the kids that are getting screwed."

The stadium, which seated 1,600, opened last season. But the problems began in January when the retaining wall broke. There are also a number of sinkholes in the field, which had to be dug up.

All of that has led to the Bulldogs not having a place to call home.

"They were calling around and they called us," Juan Diego coach John Colosimo said. "We're happy to give them a place to play. Our dates meshed, so it looks like there will be football on every Friday night. Judge is going to have a great team, so I hope that takes some of the sting out of it. I know it's got to be frustrating for [Judge coach] James Cordova."

Under the agreement with Juan Diego, Judge will play all of its home games there except for East.

The schools, natural rivals, will be in the same district starting next season. Logistically, playing essentially on the road for Judge is a nightmare. This means the team will have to get on a bus for every game and practice.

Judge, which advanced to the Class 3A state championship game last season, is again expected to challenge for a state title with the likes of Keenyn Walker and Dee Crandall.

To read the actual article on the Trib's website, click here.
Posted by Bruce at 10:06 AM No comments: